Home Interviews Can A Brother Catch A Break? 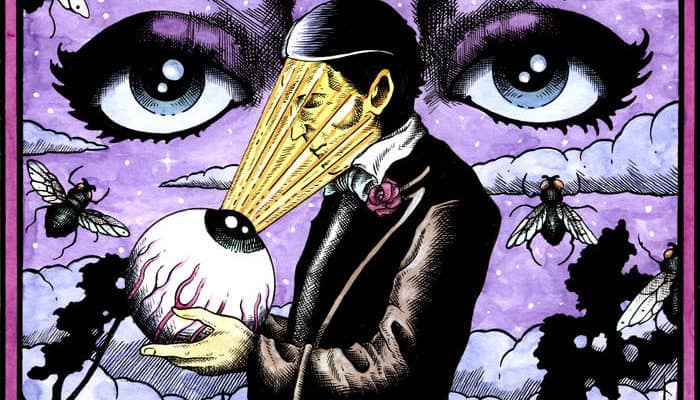 Can A Brother Catch A Break?

Vital, sweaty, innovative, and pure rock music is still out there, but it’s getting harder to find on radio or MTV. For bands that really want to break through and rise above the noise and apathy, they have to take it to the people—live.  One such band that’s earning new fans, show-by-show and through social media WOM, is Atlanta’s own roots rock quartet, Brother Hawk. The band, vocalist and guitarist, JB Brisendine, Nick Johns-Cooper (keys/vocals), James Fedigan (bass), and Evan Diprima (drums) are taking it to the people and working on making music a full-time vocation.

I caught up with the amiable, sensitive, and enthusiastic leader, JB Brisendine, just on the eve of Brother Hawk’s southeast tour to support their new single and video for the track, “Like Water,” a burning ball of raw emotion and electric grooves.

When did the band come together?

We started officially in 2011, and that’s when we first put out an EP and playing real shows. James (bass) and I have been playing in bands together for 15 years. It was just he and I in the beginning. I grew up with Nick and knew him from elementary school. I knew that he was the most accomplished and capable musician. Nick plays any instrument he picks up. He went to school to be a conductor. At the time, he was living in that world of real musicians. It took a few years to convince him to play keyboards in a rock band. That was around 2010. We didn’t play any shows until we had the EP and our show together.  In the summer of 2011, that’s when it started.

What is the Atlanta music scene like and how has it influenced you guys?

It’s had an enormous impact on us. I don’t know if there’s a specific scene because It’s really diverse. We don’t always play with bands that sound like us. We take influences everywhere, and that’s kind of like Atlanta.  It’s from hip-hop to country, to rock. There’s nothing true. Hardcore kids come to our shows, and metal fans come to see us, too

You’ve had some big artists like Blackberry Smoke, and Joe Bonamassa help you. How did those connections come about?

That all came about through our Blackberry Smoke connection–Chris Howell, a tattoo artist. He’s friends with Britt, the drummer, and I used to work for him. When we did our first EP in 2011. Chris gave our demo to Britt, and he started coming to our shows. When the opportunity arose to put us on a bill, he helped get us on the Lynryd Skynrd Cruises. That got us in on the Bonamassa Cruise too. They added us to their email list and helped us a ton. It gave us a lot of views. Cool people that are paying forward, and they built their own thing slow and steady, and on their own terms. We’re trying to do the same thing and keep the ball in our own court. Blackberry Smoke has helped us, and they continue to look out for us. They’re great people, and I’m happy to see that they’ve really popped off.

Define your sound and approach to making music.

The way we approach it to make it unique is to actually put all expectations out of our head. We just trust what the four of us are going to make when we get into the room together. We try not to go in with a goal.

We’re influenced by the Black Crowes and Neil Young, and maybe that comes through a little. Now, we’re working on simple ideas and finding a melody to ride on and see where it goes. We start with three chords and keep it as organic as possible.  Keeping it organic and making what feels right to the four of us.

I guess our sound ends up being a little rockier like the QOA and some Black Crowes. We like slow jams, deeper tracks, and I think that kind of sets us apart.

Talk to me about your new single and video “Like Water.” What is the concept?

The song is really about loss. A few years ago, I lost my dad, and he played harmonica in our band. If you hear the harmonica, that’s my dad. He loved to come to sit in with us. The song was about struggling with some depression, and then it evolved into a search for finding strength and love. My dad always supported me and loved me. The best way I can honor him is to treat other people well. That’s what my dad did for me, and it helped me through my depression.

Do you enjoy touring?

At this stage, we definitely do, but we really enjoy it. Like you said, In 2019, it’s not the same. If you want to be in a real band, you’re signing up to touring and playing live. To be a successful rock band, you have to do it, and we love it. We love playing music for people, and that’s what I think is the biggest thing. We’re working-class guys that work real jobs, and we want to tour. It’s our job, and we love every minute of it. That’s what Blackberry Smoke does–they tour all the time.

We’re getting ready to go on tour soon, and it’s the best thing when you can share it live.

How do you use social media to build a community?

Social media has been responsible for most of what we can account for. YouTube is the social media (platform) that gives us a lot of attention. It makes a band like us that haven’t thoroughly toured the country yet; known. Because of YouTube, there are people all over the country and Europe that know who we are. We have fans all over Europe, and without social media, that wouldn’t have happened. It’s a double-edged sword– you have to do a lot of it because of the algorithm. It’s part of the job now. We have to promote our music, and we’re grateful for it.

You seem to have a love for Seattle bands like Alice In Chains and Soundgarden. What do those bands mean to you?

Yeah, we’re all around the same ages. Nick and I are in our 30’s, Evan is thirty, etc. They were all the bands that we loved. Nick and I met and bonded over music. We were the only two in kindergarten. “Nutshell” is one of my favorite songs. We picked covers that we could do well on and put our own mark on and still do it while playing someone else’s songs. That whole era was important to us. The vibe of those songs spoke to what we already do — just paying tribute to the things that inspired us. Those two bands made us start a band when we were younger.

Are Atlantans supportive of local bands?

Absolutely, man. Atlanta really supports it’s bands and helped the music spread all over. That’s been going on for a long time. The same fans are bringing new people every time we plan. A lot of bands struggle with their hometown, but Atlanta has been great to us and very supportive. Even the venues have gotten better. We were begging for our first show. The people at Earl are great to us.

What are your plans for the near future?

We’re touring a lot, and then come home for the holidays and write. We produce ourselves. We did the new EP live, and we try to track live. We do a lot of work before recording. We’re going to take the holidays and the beginning of the New Year. We’re touring with Bask, friends of ours from Asheville, NC, and we’re going to Texas and a little further in February. We’re always working on touring or writing. We want to land a great support slot in the spring or summer. That’s key. With the videos, the EP, and touring, we’re trying to keep the ball running and not stop. Evan is our new drummer, and he joined just a year ago. That put us on hold for a few minutes. Evan’s addition has been a shot in the arm and given us momentum. We’re trying to be the band works hard all the time. We’re focused on making the best music and putting on the best show possible, that’s what we all care about.

Do you want to be signed by a label?

We’re not opposed to it, but as we discussed before, I don’t know if it’s totally necessary. I don’t know if you need a major label anymore. We’ve had some opportunities or interest from those folks, but we weren’t interested in doing things that way. Many bands go too fast, too deep, and then the band ends up owing the label and goes bankrupt. We haven’t taken that leap yet, but we haven’t done it. We’re going to do what’s best in the long term operation of the band. Even if it’s not as successful on a huge level, it’s important for us to be able to do it. Whoever we work with has to care. We recently got booking agents for the first time. They wanted to work with us, and they love the band. It will be on those terms. It will be to achieve a shared goal. We’re content to do things ourselves until we find the right match.

Will we see you in St. Louis anytime soon?

With our agent working hard, we’ll make it to your neck of the woods soon.